Whether you are a die-hard Game of Thrones fan wanting to head “north of the wall” or just a landscape photographer who is keen to explore what this magical area has to offer, this 9-day winter photography workshop in the north of Iceland is bound to be the adventure of a lifetime! You’ll be exposed to all of the wonderful sights of the windswept Snaefellsnes Peninsula, the volcanic Lake Myvatn area, as well as the steamy geothermal areas that give this place the nickname of the “Land of Fire and Ice”. Suitable for everyone, from beginners to amateurs and pros, this photography workshop is perfect for those with a truly adventurous spirit and a desire to expand their landscape photography portfolios. So get ready… because winter is coming!

You’ll arrive at Keflavik International Airport and make your way by FlyBus to our hotel in Reykjavik. Once there, you are free to relax or explore the city at your leisure. In the evening, we’ll meet up together as a group for a welcome dinner, where you’ll get to know your fellow travellers. Our guides will go over the itinerary for the next few days and answer any questions that you might have. 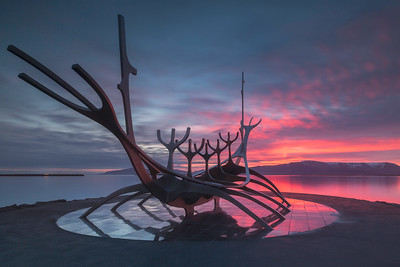 The adventure begins! After breakfast, we’ll board our specially modified 4x4 vehicle and make our way towards the magical Snaefellsnes peninsula in the northwest of Iceland.

Our first stop will be at Iceland’s most famous mountain, Kirkjufell, which resembles a church with its distinctive conical shape and eerie eye made visible by a light dusting of snow. You may recognise this as the “Arrowhead” mountain from season 7, episode 6 of Game of Thrones, when our heroes head north of the wall. This mountain is particularly photogenic, with its delightful waterfall called Kirkjufellsfoss in the foreground – the area where the children of the forest created the first White Walker.

Nearby is the beautiful black church of Budir, which makes for a stunning subject against the snow-covered lava field of Budarhraun. We’ll finish up with a sunset shoot at the sweeping coastline of Arnarstapi, where extraordinary columnar basalt and cliff formations make for stunning compositions set against a backdrop of waves rolling in from the wild North Atlantic Ocean.

If the Northern Lights come out to play, then we will capture their stunning beauty over the majestic mountain Kirkjufell.

You’ll then retire for the night in the small town of Grundarfjordur.

After an early breakfast, we’ll head back to Kirkjufell for a sunrise shoot, before making our way further north towards the monolith of Hvitserkur. This incredible rock formation on the Vatnsnes Peninsula towers 15 metres high and resembles a dragon drinking from the sea. If the tide is out, we’ll be able to focus on patterns in the sand that create fascinating leading lines to the sea stack itself. There will be plenty to shoot in the vicinity, perfect for when the Northern Lights make a display.

You’ll retire for the night in Akureyri. 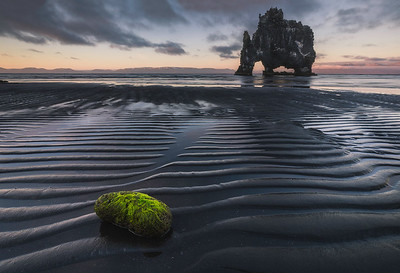 On this day, we’ll head to the glorious waterfall of the gods, otherwise known as Godafoss. Blanketed by snow with its edges encrusted by ice, this waterfall is at its best in winter when it radiates with ethereal beauty.

After that, we’ll make our way towards the Lake Myvatn area, a place brimming with volcanic history and the site of many Game of Thrones scenes! You’ll have the opportunity to photograph the martian-like lava fields of Dimmuborgir, one of the most incredible natural wonders in northern Iceland with its rugged caves and stunning rock formations. If it looks familiar, then that’s because it’s where the Wildlings set up their camp in season 3, north of the wall!

Nearby is Grjótagjá, a small cave that used to be a popular place for bathing. These days, it’s so hot that it’s impossible to bathe in there. Rather than taking a dip, we’ll capture it in a variety of compositions, making the most of the fact that this was where Jon Snow and Ygritte had their special moment during season 3, episode 5.

Hopefully, the Northern Lights will show up for us tonight, as the Lake Myvatn area offers a diverse range of compositions that will make for truly enchanting photos.

You’ll then retire for the night at Myvatn.

On day six, we’ll travel by superjeep to the central Highlands, towards the gigantic Aldeyjarfoss and Hrafnabjargafoss waterfalls.

Surrounded by tall black basalt columns, the extraordinary Aldeyjarfoss stands out amongst the whiteness of the snow. Its water plunges deeply into the glacial Skjálfandafljót river below. Meanwhile, Hrafnabjargafoss may be a little more difficult to reach, but the rewards will be worth it. Seldom-visited, its crystal blue water thunders forth, crashing into a deep snowy canyon. It makes for a stunning sight, particularly with the gorgeous pastel colours of sunset overhead in the sky.

In the evening, we’ll continue our chase for the Northern Lights amidst the strange landscapes of the Lake Myvatn area.

You’ll retire for the night in Myvatn.

Day seven sees us getting a little steamy… though not in the way that Jon Snow and Ygritte did in the cave! We’ll visit the Namaskard mountain to photograph mysterious pseudocraters, deep volcanic fissures and calderas. This area is home to the Hverir geothermal area with its boiling sulfuric mud pots, hot solfataras and seething fumaroles. This otherworldly landscape offers up a plethora of compositions and we’ll make the most of them as we explore the snowy fields. If you’re up for it, then there’ll be the opportunity to climb Hverfell, for an incredible view of the explosion crater.

You’ll retire for the night in the Lake Myvatn area.

This will be our final day in-field and we’ll get up bright and early for a sunrise shoot at Godafoss, before making our way slowly back to Reykjavik. Once there, we’ll meet for our final dinner as a group, during which we’ll go over the incredible experience we’ve had exploring the north of Iceland and its many Game of Thrones locations. No doubt, you’ll be sad to say goodbye to your new friends but you’ll be excited to take home memory cards full of images to remember your adventure in Iceland.

You’ll catch the FlyBus back to the Keflavik International Airport, from where you’ll make your way home or onwards towards your next destination.

Transportation in a spacious, comfortable bus offering ample room for you and your photography gear.

Full meals during workshop, from dinner on day 1 to breakfast on day 8