Join us on this 13 day photography workshop through the extreme Highlands of Iceland! You’ll cover everything from the gems of the south coast, such as Jokulsarlon Glacier Lagoon and the ice beach, to the spectacular Godafoss waterfall in the north and of course, the mysterious and steamy enchantment of the Highlands. Get ready to be whisked away by professional photography guides in a specially-modified 4x4 vehicle, as they take you off the beaten track to explore parts of Iceland that only few will ever see – teaching you everything you need to know about landscape photography in Iceland along the way!

You’ll arrive at Keflavik International Airport and catch the Flybus using the supplied ticket towards your hotel in Reykjavik. Once there, you’ll be able to kick back and relax or explore the city at your leisure until you meet your photo guides and the rest of the group in the evening. Over dinner, you’ll have the chance to get to know your fellow travellers and your photo guides will go over the itinerary of the photography adventure that awaits you in the days ahead.

On this day, the adventure truly begins! We’ll travel towards the south coast of Iceland, home of the country’s most stunning waterfalls and beautiful coastline. Along the way, you’ll capture the magical Seljalandsfoss waterfall from all angles, using a special pathway that goes right behind and underneath the thundering cascade.

Every place has its little hidden treasures and the secret waterfall of Gljúfrabúi is one of Iceland’s finest. Its location means that it is often overlooked, but we’ll spend some time here getting to know it intimately.

Nearby is the magnificent Skogafoss – a waterfall that you can walk straight up to, which is photogenic in all kinds of conditions. If you’re lucky with the sunlight, then there may be a rainbow floating forth from its mist.

Next, we’ll head towards the small fishing village of Vik, where some of Iceland’s most dramatic scenery awaits. Beneath the glorious golden glow of the Midnight Sun, its famous black sand beach of Reynisfjara will captivate your imagination with its tall basalt columns and impressive Reynisdrangar sea stacks rising from the crashing waves of the Atlantic Ocean.

On day 3, we’ll head east towards the Skaftafell Nature Reserve, where lush woodlands meet the icy blue tongues of glaciers. You’ll have the opportunity to photograph Svartifoss, one of the most popular sights in Vatnajokull National Park. Surrounded by dark lava columns, this waterfall is both distinct and unique, tumbling into sharp rocks at its base.

Later in the evening, you’ll photograph the immense beauty of the Jokulsarlon Glacier Lagoon, well known for the large icebergs that drift in its midst. Having calved off the nearby Breiðamerkurjökull glacier, these icebergs float serenely on their way out to sea, before crashing back onto the adjacent ice beach like diamonds glittering in the Midnight Sun.

On this day, we’ll travel north of the Myrdalsjokull glacier via the South Fjallabak Highland route. It is one of the most beautiful routes in all of Iceland, brimming with volcanic scenery. You’ll witness vast sandy plains and moss-covered lava fields on the backdrop of colourful, rhyolite mountains.

One of the highlights of the day will be Öldufell, right on the edge of Mýrdalsjökull glacier. This 810 metre high mountain is situated above a lush green valley surrounded by waterfalls. Our other highlight will be Maelifell, an iconic green volcano that rises like a pyramid above the black sandy desert that surrounds it.

After that, you’ll have the chance to photograph the beautiful Axlarfoss waterfall that lays off the beaten track, pouring into the river Hólmsá over a litany of basalt columns.

In the evening, as the Midnight Sun takes hold, you’ll enjoy a wonderful overlook of Eldgjá, the largest volcanic canyon in the world that was created during a massive eruption in Iceland in the year 900AD. Afterwards, we‘ll head for the nearby Hrifunes guesthouse, where you will spend the night.

If you thought you’d seen the last of Eldgjá yesterday, then you’d be wrong. Today, we will hike around the canyon, exploring it further. One of the treasures that we will come across is Ófærufoss, situated within the canyon and nicknamed the “impassable waterfall”. This extremely beautiful cascade appears as two separate falls, where the North-Ofaera river separates and tumbles into the volcanic canyon.

Later in the day, we will enter the Veiðivötn area, where you will shoot the magnificent Blahylur crater lake along with its neighbour, Ljotipollur. These volcanic explosion craters are filled with crystal blue water, making for stunning photography against their red earthy edges when viewed from above. 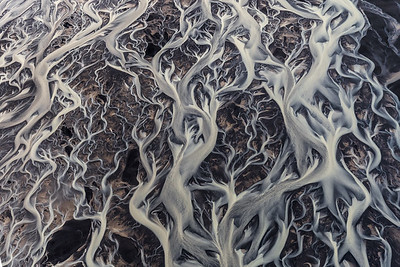 Finally, we’ll reach the Highland Oasis of Landmannalaugar within the Fjallabak Nature Reserve of Iceland. Situated on the edge of the Laugahraun lava field, this hot spring area offers up a myriad of steamy compositions, set amongst colourful rhyolite mountains and vast lava fields filled with lush vegetation.

We’ll travel along the ridge of Frostastadahals for an incredible overlook of the Frostastaðavatn lake, not far from the mighty volcano Hekla. Known for its vivid blu eand green colouration, this breathtaking lake is surrounded by black lava fields and stunning mountains.

Next up, you will shoot the many waterfalls that flow into the less visited Sigöldugljúfur canyon. Beneath the pink hues of the Midnight Sun, this beautiful canyon will have you absolutely captivated with its walls of surrounding moss. Your night will then be spent at Hotel Highlands.

Day 7 marks our return to the Veiðivötn area, where we will explore and photograph the area’s many beautiful Highland lakes even further.

In the afternoon, you will have the chance to photograph Iceland’s second-highest waterfall, Háifoss, as well as its neighbour, the Granni waterfall, both near the volcano Hekla. Legend has it that an ogress once lived in Háifoss, feeding on trout which she caught within the waterfall. If the sun makes an appearance, then there will be a beautiful rainbow rising forth from its mist. Depending on the conditions, we may visit a third waterfall, Hjálparfoss, as the Midnight Sun circles overhead. This two-stepped waterfall is surrounded by stunning basalt formations, with both steps joining at its base into a large plunge pool. 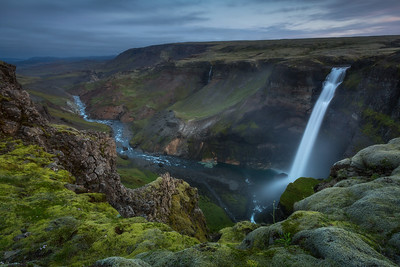 We’ll journey through the longest stretch of road in Iceland between the south and north, known as the Sprengisandur Highland plateau. Stretching between the Hofsjokull and Vatnajokull glaciers, this route features the most desolate terrain to be found in Iceland with its bleak and endless sandy deserts.

Finally, we’ll arrive at three fascinating waterfalls in the northern Highlands: Aldeyjarfoss, Hrafnabjargafoss and Godafoss, all of which are located in Skjálfandafljót, one of the largest rivers in all of Iceland. Aldeyjarfoss is a photographer’s dream, with pure white foamy water thundering past massive basalt columns into an humongous pool below. Hrafnabjargafoss is just as magnificent, with its unique surroundings making for unforgettable compositions. Last but not least, the Goðafoss waterfall shines beneath the blazing colours of the Midnight Sun. As you line up your shots at this stunning beauty, there’s no doubt that you’ll come to understand why it is known as the ‘waterfall of the gods’.

Later on in the day, you’ll have the chance to practice your long exposure skills at the thunderous waterfall Dettifoss, surrounded by beautiful wildflowers in all its glory. With 500 cubic metres of water plunging over the edge every second, Dettifoss is reputed to be the most powerful waterfall in all of Europe.

Once again, as the sun begins to get lower near the horizon, you’ll capture its golden hues at their finest. We’ll spend the evening at the Namafjall geothermal area, east of Myvatn, where you’ll have the chance to shoot the spectacular Hverfjall tephra cone volcano with its large, circular explosion crater about 150 metres deep and 1000 metres wide. At the nearby Hverarond, there will be bubbling pools of mud and steaming fumaroles to concentrate on, as well as numerous multicoloured sinters decorating the scene.

We’ll finish up the day at Mt. Leirhnjukur, near Krafla volcano, where you’ll have another opportunity to photograph mudpots and fumaroles, as well as the gorgeous Viti (meaning “Hell“) crater, with its green lake set against a dramatic background.

On this day, we’ll make our way towards the beautiful area of Skagafjörður – a deep fjord in the north of Iceland with a rich history. Here, you’ll be able to photograph the wonderful personalities of Icelandic horses, as well as Iceland’s charming turf houses that merge beautifully with the surrounding nature. Iceland’s oldest church, Grafakirkja, will make for a stunning subject in the greenery, as will one of Iceland’s few preserved turf churches, Víðimýrarkirkja.

A short walk at the end of the day will lead us to one of the most beautiful waterfalls in the area, known as Reykjafoss, where we’ll wind up the evening bathed in the golden glow of the Midnight Sun.

This day will take your breath away, as we make our way from the north down into the mysterious and enchanting area of Kerlingarfjöll. This incredible mountain range with its colourful rhyolite peaks is situated in the shadow of the mighty Hofsjokull glacier. The nearby geothermal area of Hveravellir offers up many dreamy scenes, with fumaroles and hot springs steaming in the surrounds. Here, you’ll have the chance to photograph the beautiful Gýgjarfoss waterfall, with its rusty brown and white colours falling into the river below.

This will be our final full day of shooting in Iceland. We’ll explore the colourful Kerlingarfjöll area a little more before heading southwards towards the famous Golden Circle. Along the way, you’ll capture the massive Gullfoss waterfall, thundering from 32 metres downwards into a narrow gorge a the base of the Hvita glacial river. Depending on the conditions, there may be rainbows in its mist, and you may even get a little wet from the spray!

Nearby is the famous Geysir geothermal area, where you’ll have the opportunity to photograph Strokkur – an erupting geyser that spouts water almost 20 metres high every 6-8 minutes.

We’ll finish off the day with a short hike to the mysterious blue waterfall, Brúarfoss. This waterfall is incredibly photogenic, made of numerous smaller cascades that flow together, almost like a whirlpool, into a deep blue gap.

From there, we’ll make our way back towards the capital city of Reykjavik, where we will have a farewell dinner together and say our goodbyes.

Sadly, this will be your final day in Iceland. As you make your way back by Flybus towards Keflavik airport, onwards to your next destination, you’ll be able to reminisce on the amazing time that you had photographing the extreme Highlands of Iceland… with an enormous bounty of photos on your memory cards to show for it!

Transportation in a spacious, comfortable 4x4 super truck offering ample room for you and your photography gear.

Full board during workshop, from dinner on day 1 til breakfast on day 13.

FlyBus tickets for transfer from and to Airport.